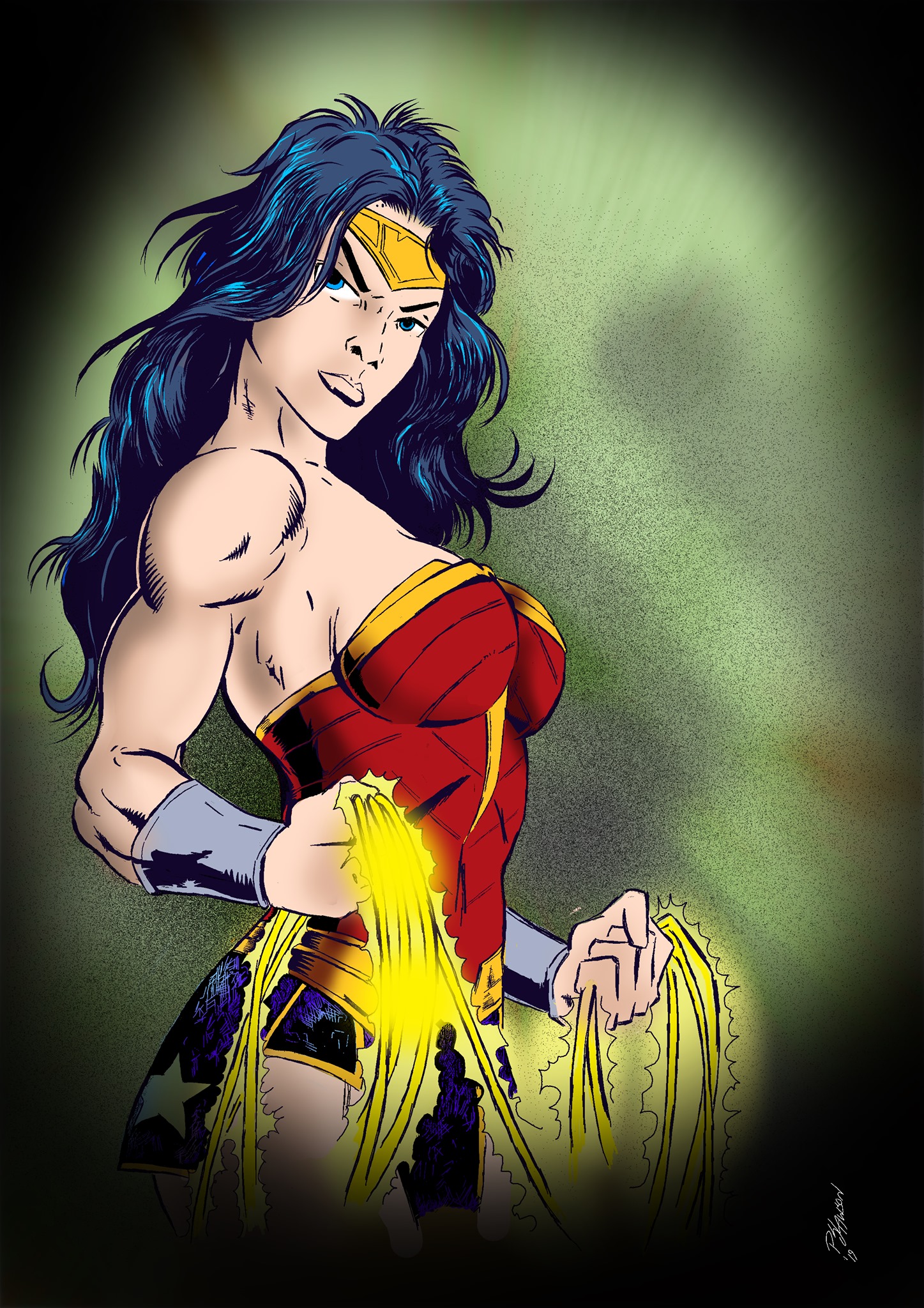 Shane (00:02):
Hello, I’m here to talk with Peter from Reverie Comics. He, uh, who’s a regular on Torn. Um, he’s, uh, joined ComX in the ComX 18 month calendar. So we’re here to talk about some of his art, so we know what it is he’ll be bringing to the table. Um, I have a… we’ll just check out one of your pictures.

Shane (00:25):
So the piece I’m looking at here is your Wonder Woman one. How, so what do you like about this one?

Peter (00:31):
That’s actually the second drawing over the top of the same pencils. When I did that really started the whole comic thing for me was seeing a line by George Hall and Gary Dellar at Reverie offered me the, any decent trade paperback way back and from that day it’s been Torn. So that’s sort of got the whole ball rolling for me. So that particular picture means a lot to me because it just, just got everything happening.

Shane (01:09):
Hiding your skills from everywhere.

Peter (01:10):
That’s the second version of it. The first one was a bit rough. I wasn’t great at women and I’ve been trying to get better at drawing women over since I started doing comics. And that one was sort of that version of it was when things started to come together.

Peter (01:40):
I don’t think any artist thinks they’ve drawn the perfect anything I’m starting to notice,

Shane (01:57):
Is this goal? It’s a good goal. So was there any, any inspiration behind doing Wonder Woman or is it just because you’d loved her as a kid?

Peter (02:06):
It’s a kid of Wonder Woman and Captain America, which that really connected with me as a kid for whatever reason. So in spite of means, or when everyone was bored, I sort of draw them. And then of course, as a teenager with the Wonder Woman Show on and all that, like it’s sort of always been in the back of the head. So she’s always a bit of a go-to, and a bit of inspiration for when I’m trying to draw a strong woman.

Peter (02:38):
Without drawing penthouse pets just don’t want to do it that way.

Shane (02:42):
No, no, that’s understandable. Yeah. Um, so that would have been the challenge for you. The fact that you have a bit of a challenge with, um, drawing women.

Peter (02:52):
Oh, huge challenge at the start, they all looked very manly. Um, depends on what you’re after! And I’ve had to battle, listen, in while I’m being published, I’m doing this. I’m having a battle with, trying to get especially faces looking feminine. That was yet a real hard thing. It’s a constant battle. But one reason you do this comic thing is because you want to get better at it over time. You’re always pushing to improve yourself, but why wouldn’t you bother doing it?

Peter (03:55):
To prop them up, um, elaborating with Darren Close on Torn and he’s frequently giving me feedback. Not only, it’s also very useful, very useful.

Peter (04:08):
But that’s what I want him to do. I want to make his job easier and he wants to make a better comic too. So it’s all probably

Peter (04:38):
While you’re there now you will always know what works and what doesn’t, when you’ve got somebody else, we can give you that second pair of eyes and tap at you. You gotta take it, cause that’s the only way you’re going to do a better piece of work.

Shane (04:50):
Yeah, exactly. Yeah. So is there anything about this picture that you think will connect with your fans or followers?

Peter (05:02):
I still have a weird concept that I even have fans and followers, but then I read there that that’s a bit weird, but yeah.

Peter (05:16):
Um, I just hope that that particular joy in people sort of will sort of know that it’s, it’s a point where things started to work for me. And, um, it’s a symbol of that, that moment when some things began to gel also I began to find small. It sort of started to get better for me.

Peter (05:57):
Look, I think every artist out there, I think any of us just sit back and look at any piece of work. Wow. That’s amazing. I don’t think any of us do that. Right. We’ve got that wrong. And I think that’s part of the battle to learn to live with what you maybe don’t always think isn’t quite right. Sometimes you’ve got to settle, you know, you’ve got to say, okay, this is as good as I can do now. What have I learned from it? And put that into the next one.

Peter (06:29):
That’s all you can do. Otherwise you’re going to sit there on one page two months and getting nowhere with it.

Shane (06:41):
Nice. Um, Thank you for your time, Peter. It was great to talk to you about your art. Um, it was very insightful on what goes on behind the scenes. Um, so yeah, thank you very much. And um, catch you around.

Peter (07:00):
You’ll find Peter’s art on May 2022 of the calendar. That’s the ComX 18 month calendar, um, to find out more about the calendar, go to ComX.link, and that’ll take you to the Kickstarter page and you can, um, register your interest so that it will notify you when the Kickstarter itself starts. Thank you for your support and seeing the next video.