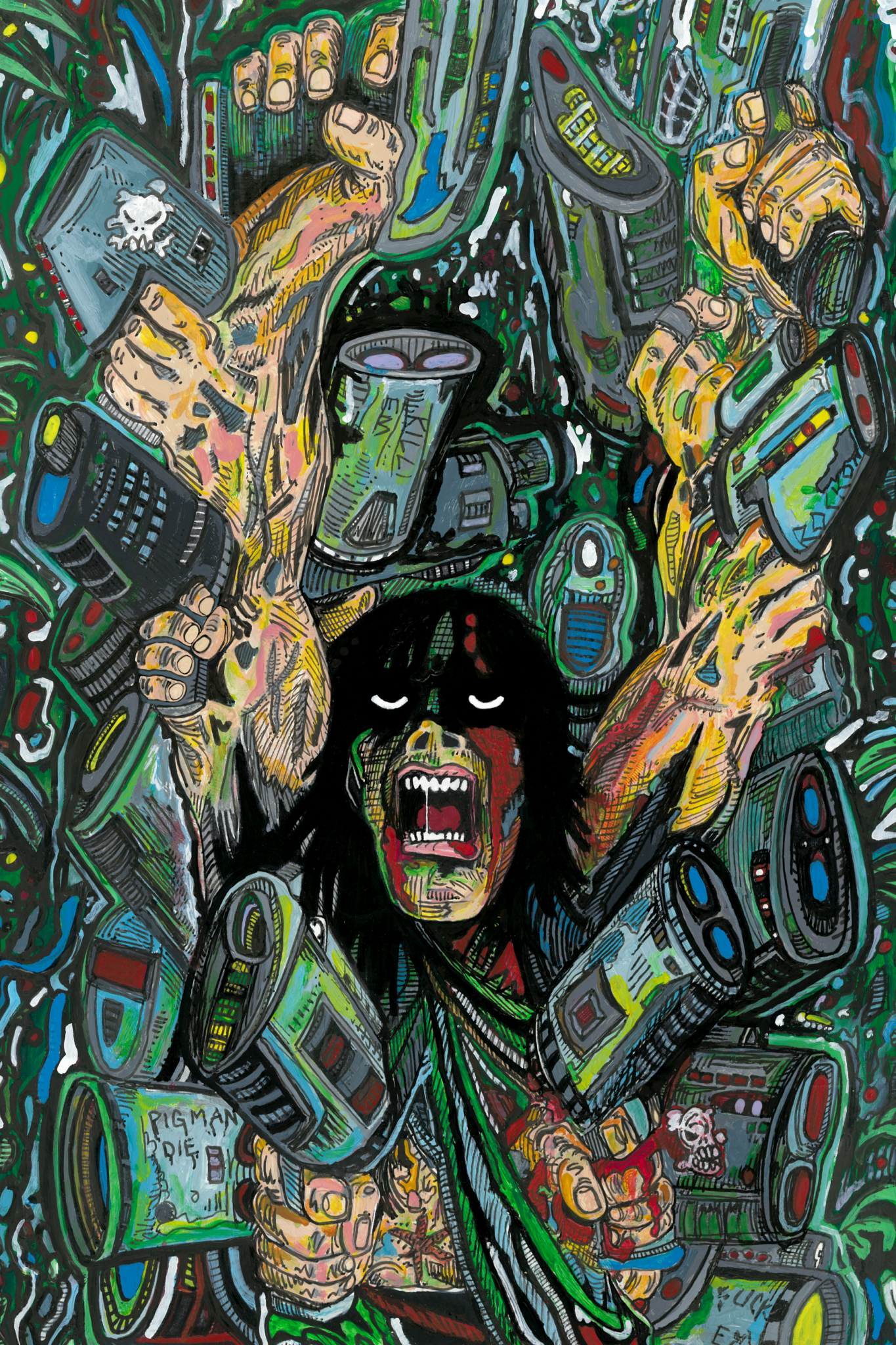 Shane (00:06):
So here we are looking at the cover of issue three of Battle for Bustle. Um, looks like a man with many, many guns. So what do you like about this piece?

Leigh (00:19):
Uh, the original pencils were done in 2011. Uh, Lennox Hanson is his name and Lennox Hanson is the predominant character of, uh, issue three. He is out of all of my characters, possibly my favourite. Uh, you will see another one of my favourites, Hibiki Gecko at some point, but Lennox is a young man with lots of attitude and, uh, has an awful lot of hands on him, which all hold guns.

Leigh (01:00):
He’s an athletic, he’s an athletic fellow and he’s very cheeky. And, uh, I love that piece because I think that sums up [unintelligible] in one shot.

Leigh (01:16):
I loved going from blue to red, into green. I thought it worked. And, uh, that the many years I’ve been drawing, that particular image has always against in my mind. And I had always envisioned that as the issue cover.

Shane (02:22):
It does. It does. I wanna, I wanna see the issue now very much so. Um, so I’m guessing the challenges for this where the many hands and many guns… not really any?

Leigh (02:36):
The challenges were not so much the hands and the guns that have, uh, held or it makes green and gray work so that something comes out up at you. Uh, it took a long time. That one, I’ll be honest with you, man. Um, but, uh, there are a few moments where that’s it, that’s it, that’s it? No, it’s not me giving another day or two, you know, so I fumbled around and stuff and come back to it and had to doctor – to darken a gun barrel or that sort of thing, you know?

Leigh (03:21):
And, uh, what’s falling on you I’d reached a point was it was one little thing that, uh, was bothering me and I couldn’t work out what it was and Lennox to me was always someone that would grab a bit of rock or something and scratch something into his gun, you know what I mean, whether it was the “091177” or “Free”, you know, “he will not wear the mask” or, you know, “Free Battle”, you know?

Leigh (03:57):
And then I was looking at it one day and I thought, you know what? I’ve never actually busted out a proper swear word, like F*ck in an image in any of the word bubbles or anything. And then in the bottom right-hand corner on one of the guns,

Leigh (04:16):
At bottom of the page I dropped the Fck and it slipped right past everyone. And you were all the first people here to know that. Uh, here is a question for everyone that’s listening, but you know, yourself, even as a comic collector and mate, has there ever been a Fck dropped on a cover of any comic before?

Leigh (04:59):
Well, if anyone would like to, you know, like chuck into the conversation mate, and you know, if they think there’s been one, then that’s cool. Uh, but my, uh, I like to swear, I’ll be honest with you. It’s like Lennox Hanson is one of those characters that I hope everyone has a little piece of that. You know, I feel like that guy, you know, cause he’s a 360 degree tank, mate, you know what I mean? He’s got 120 guns on him. He shoots to the 360 degree angle and whether, figuratively, it’s bullets you want to fire. Sometimes you want to have that confidence as an individual to stand up for yourself and what your personal beliefs are, whether they’re right or wrong or anyone else, but yourself. But you know, you just want to just, “I’m not copping that” Lennox Hansen for me is the character that does that for me.

Leigh (06:34):
And what it boils down to man is like, I love in a, if you’ve got no hope, man, whether it’s, you know, I just want people to believe in themselves and have some hope and you know, I’ve picked a dystopian futuristic topic to put my own, you know, self idiosyncrasies, hopes, horrors, you know, like nightmares, uh, out there.

Leigh (07:08):
But before I could connect, I said to someone the other day, I don’t really care if I haven’t sold one comic, as long as it goes to the right person and the right person, I mean by that in a way, having this conversation, you and I, for a reason, and it’s because we love comics and whatever it was, whatever it was that was in the Uncanny X-Men that you read many years ago or whether it was in a relationship with, you know, a father, a mother or a, you know, a girlfriend, an ex-girlfriend, you know, anything you have to just never give up hope.

Leigh (07:56):
And I hope in the oncoming episodes or issues of Battle for Bustle that people do realize, you know, I don’t want it to be negative. I want people to enjoy it. And if one little kid out there looks at it and says, that’s awesome, I want to draw. And I want to ride and I want to do this, then I would be happy, but I would implore them “Don’t wait until you’re 43 to do it.”

Leigh (08:35):
If this is what you want to do, then do it. And that’s how I think the battle for bustle is it can be done on whatever level. However, I don’t know. I mean, I’m no legend or anything that’s far from it, man, 43 year old d*ckhead, really that had no idea that just hopes that people, uh, you know, enjoy it. And if you don’t, that’s cool, but it can do then hopefully that, you know, if one person comes out of it, then that’s, that’s a step in that for comics.

Leigh (09:14):
So, and the Australian comic book, industry’s got a lot of great people, a lot of great acts and artists out there, and I’m just very passionate about it. Uh, you know, but I never had a choice. My dad never gave me a choice. He was always, what’s your first comic. And I chose GI Joe, Issue 12, 1983. Uh, I think it was August of that year and the next comic guy napped. Uh, I think the issue was the Uncanny X-Men issue 171, which was August 1983, I believe. And from that point on, I never looked back – I never have. Through dark times. Light times. Love comics, man.

Shane (10:32):
To check out more of Lee’s stuff, go on over to battleforbustle.com to check out what he’s doing on the calendar. Go to ComX.link. That’ll take you to Kickstarter simply click on the notified button. And this will notify you through email when the Kickstarter begins. Thanks for your support and see you next time.