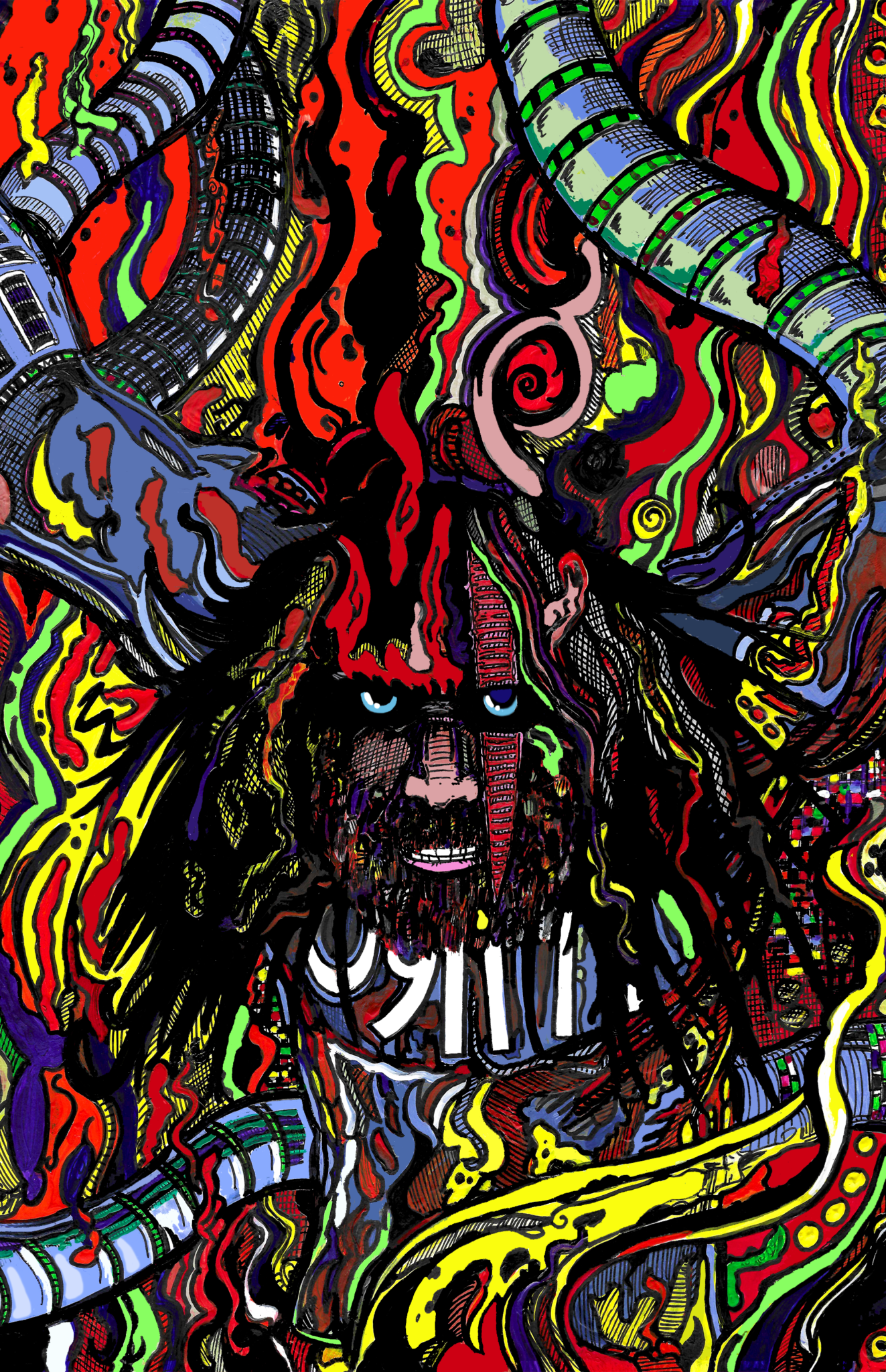 Shane (00:06):
So here, I’ve got the cover of number two, uh, Battle for Bustle. Um, what is it about this particular cover that you like?

Leigh (00:21):
The fact that it, the cover itself represented an awakening. You know, you go through the blues and the dark hues and slight yellow. So the first one you come into the second, and it’s red man and I wanted people to realize that, I guess, even though Christopher, isn’t quite where he should be as an individual.

Leigh (00:55):
He’s had an awakening there and it’s just an eruption to the next phase of the story, because the first issue can be quite dark, and I wanted to give people the notion that there was Hope.

Leigh (01:10):
Because essentially these comic books are about hope, hope for the individual. Um, I hope I portrayed it correctly. I think I did – sort of in print.

Leigh (01:51):
This here, on this wall is the original idea of the sketch. So cable is on my walls and, uh, that there, if you can say it is the pencil sketch.

Leigh (02:19):
Yes, sweet. Well, I came from that drawing where he gets, you know, the ship explodes, the ragged man turn up and he’s got a chance. He never had that chance before and everyone has a chance. So that’s what I hope to portray in that color.

Shane (02:43):
Okay, cool. I like it. So, um, that pretty much probably covers what inspired the piece as well, I guess, unless you’ve got something more to say about that.

Leigh (02:53):
No, not really. I just love painting and I love drawing [inaudible] work. So you just, it’s an instinctual thing. Uh, probably come across as a bit of a wank , yeah, but uh, yeah, it is just instinctual, man. I don’t know. I really don’t know whether it’s right or wrong. It’s just at the time, it’s what I’m feeling. It’s what I think of most honestly, to the best of my ability at that moment represent that story.

Leigh (03:39):
Uh, yeah, but yeah man, they were challenges. First challenge was like, what the hell do I do for the second cover?

Leigh (03:50):
Okay. Yeah, yeah, yeah, no, that was a challenge in itself. And believe me, people, I close friends and stuff, um, you know, Tam, my mum, you know, Peter, you know, uh, Shane, Jason, like, you know, I have friends that I talk to about this stuff too, you know, just pointing out bumps and stuff on the road and they were all like that, see what you don’t so yeah. Realistically on a I’m sorry, I know this isn’t a kid’s show and I do apologize for that, but know he did get to a point where sometimes you just think that’s [expletive], you know what I mean? I get it, that I’m doing it. So that’s what that’s what happened. So yeah. Yeah. No, that sounds terrible. But um,

Leigh (05:07):
I think when I was a younger artist, I used to have this real idea in my head that what was in my mind had to come out on paper and I very quickly realized that doesn’t why it’s happening. I don’t use references. I don’t have models and stuff. So, a lot of the stuff made honestly a hundred percent of the stuff that you see on page is just me bang, bang, drawing, man. I love drawing. And then when I had the two years where I just thought put the pencils, so I’d not started a painting, a real artist.

Leigh (05:53):
You can, you can build on these things. You don’t just have to do it in one hit, you can come back to it in a month. You can come back to it in two months, you know? And I guess that’s what I’m trying to put across is, you know, sometimes things don’t have to be gladly perfect mate, do you know what I mean? Like you just have to put it out there and have, um, I don’t know if it’s right or wrong. It was right for me at the time.

Leigh (07:07):
You know, whether those people reconnect with me is entirely up to the individual, but not going to throw stones at you mate but not, uh, but you know, again, you have to get that little element of luck, I suppose, the marketing side of things and what works better coming after a second issue, which is blue, then the next issue, which is red. So I thought that also worked.

Leigh (07:55):
That was Lee talking about the cover of issue two of Battle for Bustle. If you’d like to check out more of his stuff, go on over to battleforbustle.com. If you’d like to check out his contribution to the calendar, go to ComX.link and that’ll take it into the Kickstarter’s pre-launch page where you can register your interest and, um, get an email when it starts. So, um, thanks for your support and see you later.