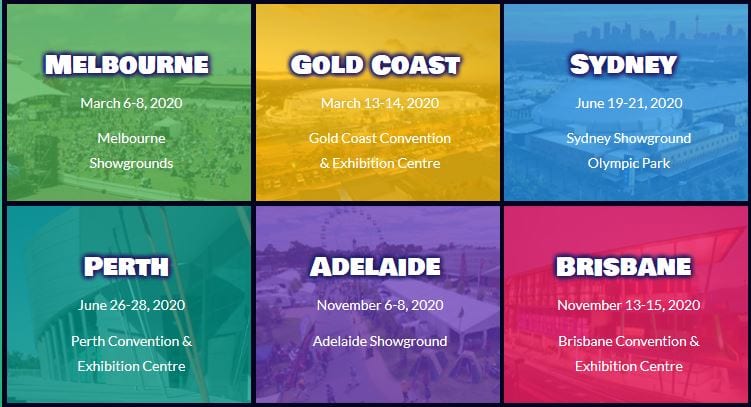 For Aussie geeks out there, Supanova 2020 is one of the biggest events of the year. Every major city will have one Supanova with them, so you’re looking at a big comic con for you.

If you’re unsure what’s about to go down in your local Supanova, this is where you need to look. We have all the deets for the upcoming Supanovas this year. Let’s hope someone you like is coming to one of these events.

Find A Supanova Comic Con Near You

Almost every major Aussie city will have its own Supanova, so you don’t have to get across the country to experience this wonderful event. Six cities have a date with the most wonderful geek icons of Australia. These are:

Since it’s still early in the year, some later Supanovas don’t have too many details yet. What we’re sure is you’re going to see many great names with their own panels. They’ll be there to see their dedicated Aussie fans. Let’s see who we have so far.

For the fans of Supanova, they have some of the biggest geek names as guests for you. For comic fans everywhere, the Teenage Mutant Ninja Turtles team is coming.

Original TMNT co-creator Kevin Eastman will be in Melbourne and Gold Coast. He’ll be there together with DC writer and artist Freddie Williams II, Jon Sommariva, and Jamie Johnson. There’s also James O’Barr, the legendary creator of The Crow.

For the anime geeks out there, Supanova 2020 also has some of your favorite voices coming by. They’re not some random voice actors either. They’re some of the most legendary in the biz.

Attending A Supanova Is A Must

As you can see, the list will start growing and growing. We’ll keep you posted with more details as the year goes by. Supanova 2020 is going to be one of the biggest conventions in Australia. It only gets better from here, so expect only the best. Are you going to a Supanova Comic Con near you? You should, or else you’ll miss out on some of the best.